La chambre d’eau is an association established in Le Favril in the Hauts-de-France
region since 2001, that hosts multidisciplinary artistic residencies. It supports research,
creation, production and contemporary writings distribution. 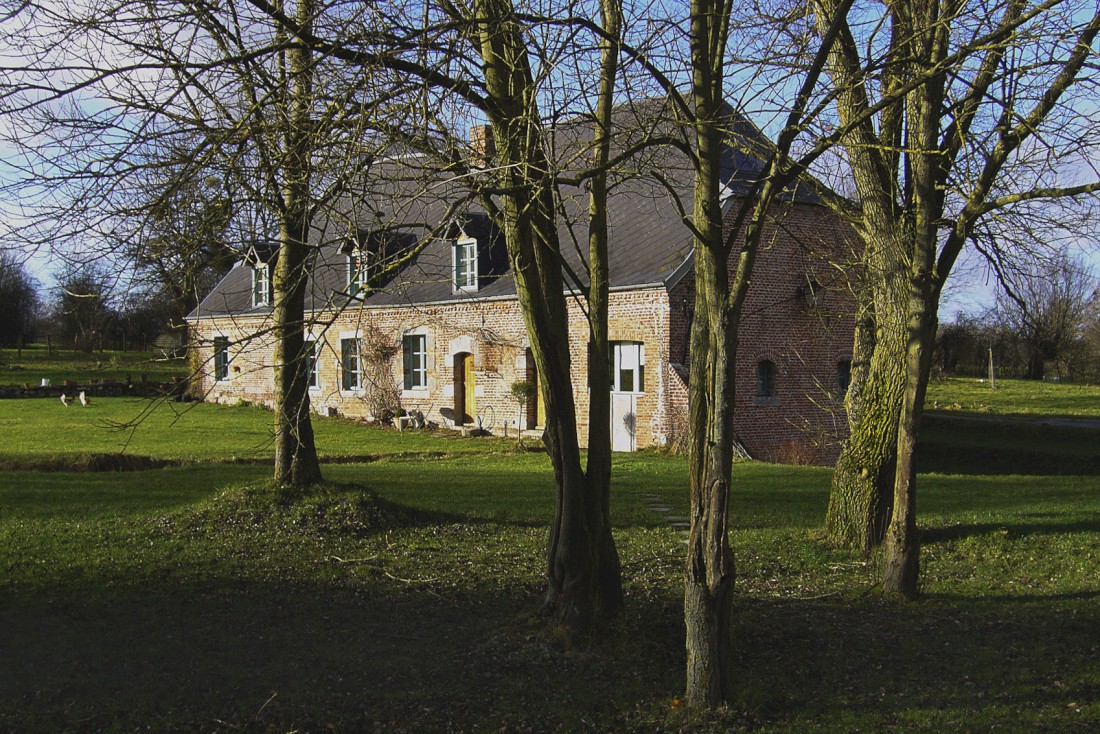 La Chambre d'eau have determined four categories of artistic residencies, each answering different stakes.
They are inscribed in a will to offer different ways to grasp the territories of contemporary creation:
Lab residencies : They consist in giving time to artists or theater companies to write a project, or to allow them to see a reflexion on their artistic issues through. Invited artists are autonomous and have spaces at the Moulin des Tricoteries at their disposal for free and for a week. This is an ideal place for concentration, research and experimentation. At the end of their residency, artists have the opportunity, if they are willing to, to do a public presentation of their work step.
Terms and conditions
There are two of these residencies a year and they last around one week. The transportation and accommodation package is taken care of by the association and the public representation, if it takes place, is paid.

Open workshop residencies : These are research and experimentation residencies, particularly opened on issues that concern the Avesnois territory. Regular meetings with La chambre d’eau team are offered as part of a work and implementation process that combines practical experimentation and critical evaluation, in order to support the best the construction of projects linked to territorial problematics, places and partners. Each resident has the possibility to regularly open the workshop to share the ongoing work and his approach with publics. They can also plan meetings or artistic gestures within the frame of the association artistic programme.
Terms and conditions
There are two of these residencies a year and they last around three weeks that can be separated during the year. Transportation and accommodation are taken care of by the association alongside with a participation to the production cost of 1 500 euros and the provision of workspaces (on the site or elsewhere depending on needs).

Production residencies: are developed on a longer time and necessarily lead to the production of one or several artworks. These residencies can arise from artists’ request or from invitations by La chambre d’eau. They are conceived and elaborated in close relation between different places and territorial partners. They are formalized around creation times, public meetings, exchange times, both formal and informal, reflexion times of construction, analysis and implementation. Residencies are offered in accordance to and linked with the events organized by La chambre d’eau. These key moments allow to give a real visibility and
distribution of the artworks.
Terms and conditions
They are three production residencies a year and they last around three week that can be dived and spread over a certain period of the year. A transportation and accommodation package is taken care of by the association. A residency grant of 2 000 euros and a participation to the production costs is also allocated (it can vary according the needs of the project).

Research residencies between artists and art/human sciences researchers : As new experimentations, these residencies aim at creating exchanges between research and artistic practices. These residences allow to define a common research field between pluridisciplinary artists and researchers in art and human sciences to think back production and reflexion conventional approaches. We wish innovating artistic, theory and methodological propositions to grow. Our goal is to initiate collaborations aiming to discuss and produce, in a rural context, new methods and discourses.
Terms and conditions
There is one research residency a year lasting around four weeks (divisible). Transportation and accommodation are taken care of by the association alongside with a residency grant of 2 000 euros and the provision of workspaces during three weeks.

— A workspace (2 x 50m2) and an outside space of an hectare.
— Two rooms with internet connexion
— a four rooms flat in a nearby city provided by a partner
— a 60m2 yurt
— numerous natural outside spaces
— video and sound material are provided and, if needed and depending on the project and the means available, additional material can be lended or borrowed to partners (music material, multimedias, stage material, 3D printer…),
— a library made up of art books, literary work and exhibition brochures is provided to the artist during his residency time.
— La chambre d’eau has many partners acting in its intervention territory and can, for some projects, borrow a stage space. Moreover, in residencies projects, the association tries to create relations between artists and the territory by putting them in touch with local actors and, if the former are willing to, they can work in all sorts of workspaces and be in contact with multiple people (companies, farms, touristic places, inhabitants, patrimonial or natural sites) for the production or the distribution of their artwork.
— The support of La chambre d’eau’s team in all its range of skills. Thus the artist can be supported as much in his artistic production as in his administrative tasks and his research of production means.

Applications can be submitted throughout the year. Selection is led by the artistic director and La chambre d’eau’s team and for the biennal festival by a committee composed of the artistic director and artistic partners.
The application file must contain :
An intention note and, for research residencies, a 3 pages maximum conceptual text, a cover letter, a short biography for artists and researchers and a documentation on previous words (publication list for researchers).

— Meetings during each Rendez-vous au Moulin every month around a step of work, at the end of the residency or possibility to present a previous work.
— Presentation of the works during a key moment organized by La chambre d’eau called the Echappées (Breakaways) in different places of the territory, in situ installations during the two-yearly festival Eclectic Campagne(s), dedicated to contemporary and multidisciplinary creation, mediation actions built according to the artistic propositions.